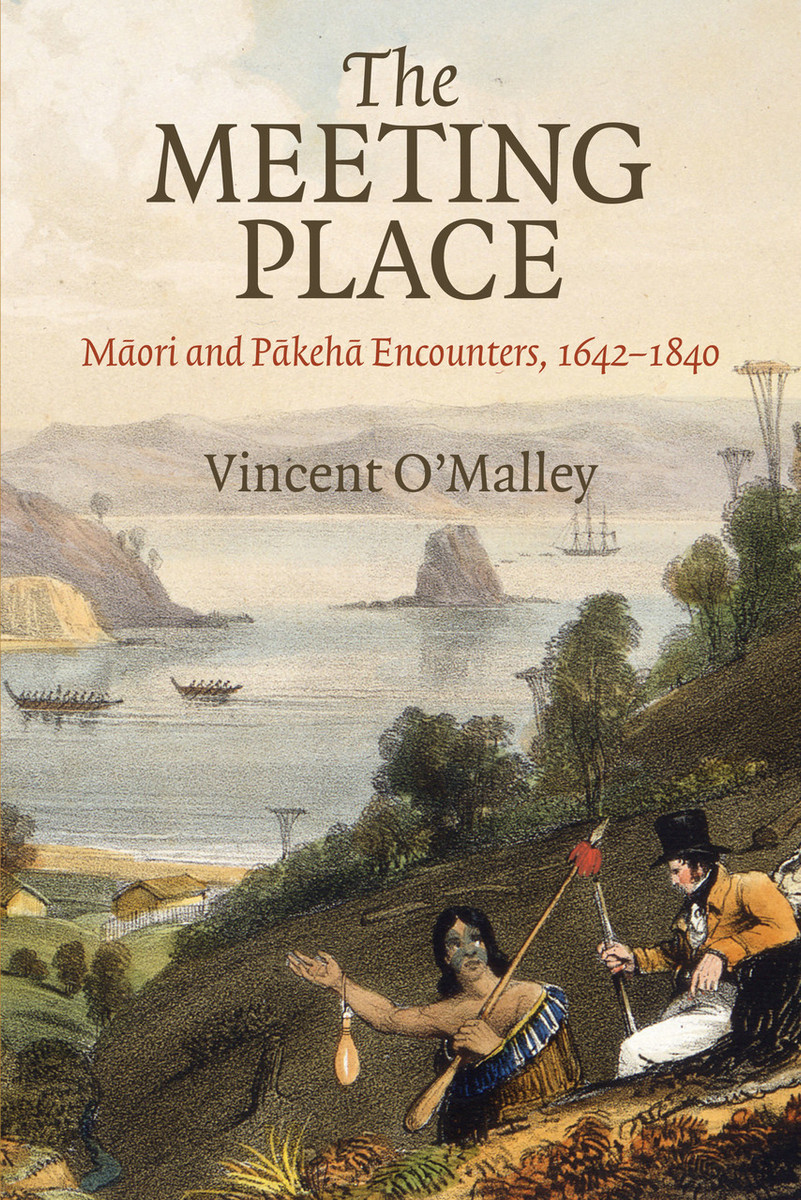 Here Vincent O’Malley examines the ‘meeting place’ negotiated by Māori and Pākehā from 1642 to 1840.

How did Māori and Pākehā negotiate a meeting place? Would Māori observe the Sabbath? Should Pākehā fear the power of tapu? Whose view of land ownership and control would prevail? How would Māori rangatira and Pākehā leaders establish the rules of political engagement? Around such considerations about how the world would work, Māori and Pākehā in early New Zealand defined a way of being together. This is a book about that meeting time and place, about a process of mutual discovery, contact and encounter — meeting, greeting and seeing — between Māori and Pākehā from 1642 to about 1840.

After introducing the brief encounters and misunderstandings between European visitors and Māori before 1814, O’Malley focuses his study on the period between 1814 and 1840 when he argues that both peoples inhabited a ‘middle ground’ meeting place in which neither could dictate the political, economic or cultural rules of engagement. By looking at economic, religious, political and sexual encounters, O’Malley offers a strikingly different picture to traditional accounts of imperial Pākehā power over a static, resistant Māori society.

In this meeting place, O’Malley shows, Māori and Europeans re-evaluated cultural priorities, adapted the customs of the other people that they found useful and sometimes ‘went native’ as they fell over into the other culture. O’Malley concludes with an analysis of how the middle ground gave way around 1840 to a world in which Pākehā had enough power largely to dictate terms.

The Meeting Place is an impressive and definitive statement about the nature of Maori and Pakeha contact in pre-Treaty of Waitangi New Zealand. The book reinforces Vincent O’Malley’s standing as a historian of importance in Australasia and supports the growing international respect for the significance of New Zealand historiography. - Ken Coates, Journal of Pacific History

The Meeting Place is an important, thorough, well- reasoned text that I will refer to often. It would be an excellent text for any history student new to the subjects it explores, particularly where it is important to remove cultural blinkers and any assumptions about what early contact in Aotearoa actually looked like. - Tina Makereti, Mai Journal

It’s a really exciting book. It’s all about embracing the complexity . . .  if we’re looking for simple, binary explanations of our history we’re deluding ourselves, really, and it’s new interpretations from old sources. – Paul Diamond, RNZ National