The following speech by Gregory O'Brien was delivered at the launch of two poetry collections, He's So MASC by Chris Tse and Pasture and Flock: New and Selected Poems by Anna Jackson, at the Wellington Writers & Readers Festival. 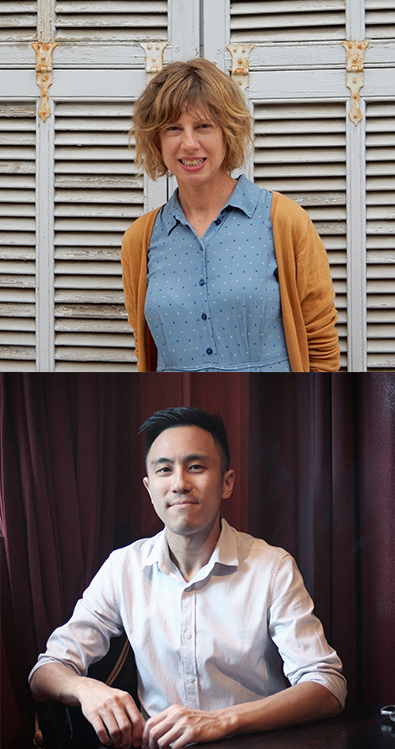 I can’t be the first person to notice that the three letters that make up Chris Tse’s surname are also the initials of the grand-meister of modern poetics, T. S. Eliot. What, I ask myself, are we to make of this in relation to Chris’s new book, a collection which is awash with love songs, but hardly those you would expect from J. Alfred Prufrock? In some of Chris’s nocturnal offerings, however, we might recognise Eliot’s ‘The Waste Land’ rewritten as ‘The Wasted Evening’ or in the parlance of our times, ‘Getting Wasted’. Both poets offer nocturnal choreographies,hollow men, stuffed men / leaning together / headpiece filled with straw. . . shadow-laden city-scapes of the inner self. In the broken mirror of Chris’s book cover, as in the poetry itself, the world is reflected, refracted; it is made simultaneously vivid and mysterious.

While Chris’s magnificent debut collection, How to be Dead in a Year of Snakes, was centred around a death and the backward gaze into history, the new book is all about life: high life, low life, city life, street life, night life, the love life, the gay life. . .‘Staying Alive’ and how to be alive very much in the present tense. It is a poetry of the raised voice and the raised room temperature.Give me calamity, he exclaims.Give me soul. Faced with the existential predicaments of the era, the poet proclaims:I choose disco.

A notable woman writer recently remarked to me that Chris Tse was far and away the best-dressed poet in contemporary New Zealand letters. She suggested that he probably had his clothes ‘made for him’. And therein lies, perhaps, the most overt connection with the dapper, suit-wearing figure of T. S. Eliot lurching through the front door of Faber and Faber, mid-twentieth century. Poetry, too, is a question of style, of form, content and finding a good fit—something both the elder and the younger T. S. E. know well.

Like Eliot’s verse, Chris’s poems are not only well-turned-out, they are wellturned. He is a sophisticated and ‘literary’ writer in the best sense, even if Eliot’s aesthetic and moral high ground has been replaced by the intellectual and actual paraphernalia of twenty-first century life—a reality as defined by cultural studies, gender politics, and social media as it is by the selfie-stick, the iPod on shuffle and the rent-a-rapper remix.

He’s So MASC teems with memorable phrases and images:I am turning into a weather system. With slow tongue and an outlook for disaster, I am clouds conversing / with each other. . . .Amidst the minutiae of a dexterous amorous life, there are wolves and runaway trains. . .This is the way the world ends, Chris writes in ‘sweetheartbreaker’. . . But then the music always manages to start up again—the Bee Gees one moment, a crossover ballad by Taylor Swift the next. Be brave, Chris’s book concludes,press repeat.

The opposite of music is music—albeit of a different kind. I imagine the strobe lights, bass amps and turntables of He’s So MASC replaced by a harpsichord or children’s choir in Anna Jackson’s Pasture and Flock. The title of her selected and new poems immediately calls to mind the Agricultural and Pastoral Show—also known as the A & P Show—so beloved of rural New Zealand.

Jackson’s book is about various kinds of growing up, and a parallel state of growing downwards. As you get older you get closer to childhood, her book smartly but tenderly reminds us. Having children is often integral in this—but poetry is also a means of recapturing that sense of immediacy, wonder and wide-awakeness.

At the same time, her poems manifest a generous and never alienating bookishness. Literature is made up of reading as well as writing—and both are necessary ways we extend the state of childhood. With friends, husband and family frequently in attendance, the poems also include a menagerie of dogs, swans, sheep, the denizens of the zoo near the poet’s home, cranes, whales and D. H. Lawrence’s snake.

Anna’s is a poetry of the commonplace, the low-key and the personal—coming to us from Emily Dickinson via Elizabeth Smither—the poet as studious girl or mother, as time-traveller who encounters Mayakovsky and notes wryly:He is on his knees before the treasures of my mind. It is as if the Russian poet’s famous epic A Cloud in Trousers has become—by the agency of Anna’s self-styled, unpredictable, vital feminism—a cloud in a skirt.

The poems are characterised by the imposition of certain modes of scholarship on the most everyday of topics. Such is her way of animating rather than weighing down her subject. She writes:

see the sky in the sky, as magisterially

as the sea can be seen in the sea

. . . She traces the shape of the thing in the word and the shape of the word in the thing. In the tradition of Rimbaud, Anna’s poems are illuminations. She invokesall the other poets of the sun—from Klebnikov and Lawrence to Catullus and (simultaneously) Horace and Susan Sontag. . .

All this bookishness is swept up into, and an integral part of, the family life which is her inward sun. Among the familial goings-on, there are games aplenty—badminton, swimming, tennis, pool, some tramping. These are surprisingly sporty poems—in the social rather than competitive sense. Anna bats ideas back and forth: barnacles, whales, James K. Baxter and God are paired up in one poem, as if configured for a doubles match. . .

Highlighting all that has gone before it in Anna’s writing life, Pasture and Flock reminds me of the grand parade at the end of the rural A & P show, when the tractors and winning sheep, the woodchoppers and gymnasts, and the ribboned, trophied pups and farm animals are lead around the enclosure. And we see them all again and afresh, in a new light with a new sense of connectedness, both their surfaces and depths replenished, revitalised.

I’m delighted to launch these two collections; both are solar- as well as neon-powered in their own very different ways. At once stylish and stylishly turned out by the crew at Auckland University Press. You need both in your library, just as you need, in your wardrobe, both your sensible and your dancing shoes. . .