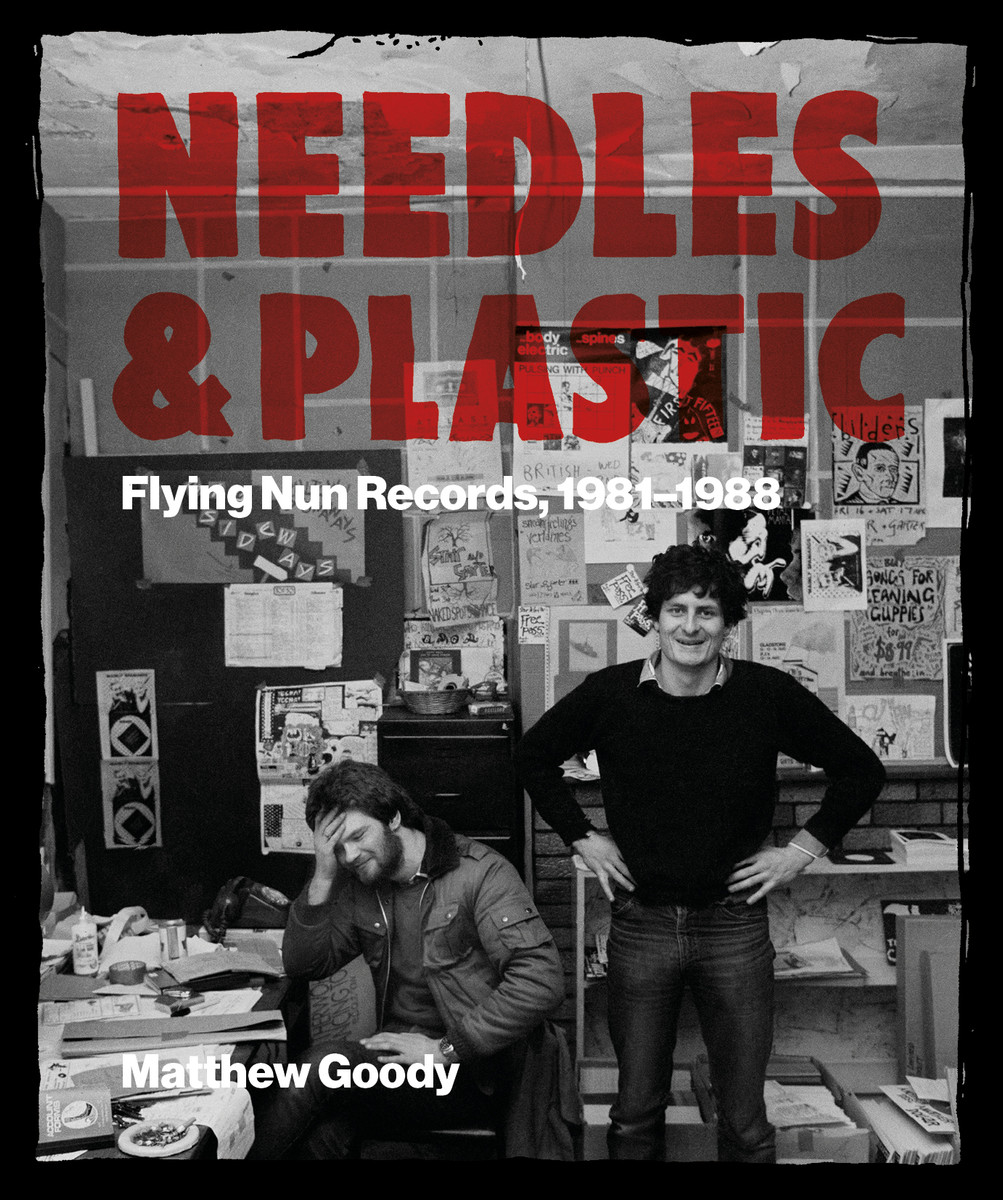 A richly illustrated Flying Nun discography – all the records from ‘Tally Ho!’ to Bird-Dog.

Founded in 1981 by Roger Shepherd, Flying Nun Records unleashed an extraordinary wave of New Zealand music on listeners in Aotearoa and around the world – from The Clean to the Headless Chickens, Look Blue Go Purple to The Jean-Paul Sartre Experience.

Needles and Plasticis a fully illustrated account of the label, the bands and the songs from 1981–1988 – the critical early years, when the label was based in Christchurch and getting records pressed in New Zealand.

Matthew Goody tells the story through the records themselves. In entries on over 140 records from The Clean’s ‘Tally Ho!’ 7" in 1981 to The Verlaines’ Bird-Dog LP in 1988, the book draws on years of research to reveal the stories of the bands, the recordings, the songs and the audience, with a host of characters contributing along the way – Shepherd, Chris Knox, Doug Hood, Hamish Kilgour and many more.

In this remarkable tale of creativity and chaos, do-it-yourself innovation and extraordinary attempts at world domination, Needles and Plastic tells the inside story of one of New Zealand’s – and the world’s – great independent music labels.

Matthew Goody is a Canadian editor and publisher who has worked in the book industry for over a decade. A fanatical record collector and researcher, he has spent years combing through the archives and record stacks to compile this comprehensive discographic history of Flying Nun’s early years. He currently lives in Vancouver, Canada.

‘With his gratifying archive, Matt Goody details one of the most successful eras in the history of rock music – Flying Nun Records, formed in 1981 by Roger Shepherd in a Christchurch record shop. Shepherd and his brilliant cohorts served up the legendary output of not only kingpins like The Clean, The Chills and Tall Dwarfs, but also captured the best from favourites of mine like Able Tasmans, Bird Nest Roys, Look Blue Go Purple and The Verlaines. Goody provides the most comprehensive presentation yet of Flying Nun’s rise from Shepherd’s notepad to international underground rock sovereignty – and a vital part of one nation’s collective art history.’
— Bob Nastanovich, Pavement

‘This is so thoroughly and lovingly researched and written, it reads with the narrative drive and immediacy of a first-hand account. This from a writer and fan who came to the Flying Nun story two decades later and from half a world away. It is a remarkable achievement, and another bizarre twist in the Flying Nun story that its first meticulously written history should be produced in such circumstances.’
— Richard Langston, Garage

‘A fascinating and edifying book that is drenched in a wealth of fabulous photographs and illustrations throughout. And Matthew Goody really gets it: rather than simply expressing exasperation at the idiosyncrasies of the label in its early incarnation, he determines to untangle conundrums presented by them. His inspired methodology and meticulous research have resulted in this marvellous story – told as a series of stories – that is absorbing from go to woah.’
— Denise Roughan, Look Blue Go Purple and The 3Ds

‘There have been insider accounts of the Flying Nun story: how this ramshackle indie changed the game with a do-it-yourself alternative New Zealand music. Yet it is a Canadian record collector rather than an insider who has written the most detailed and palpable account of those reverberant early years, by using the records themselves as portals to the stories in this energetic, exhaustive review of the label’s Christchurch years.’
— Nick Bollinger