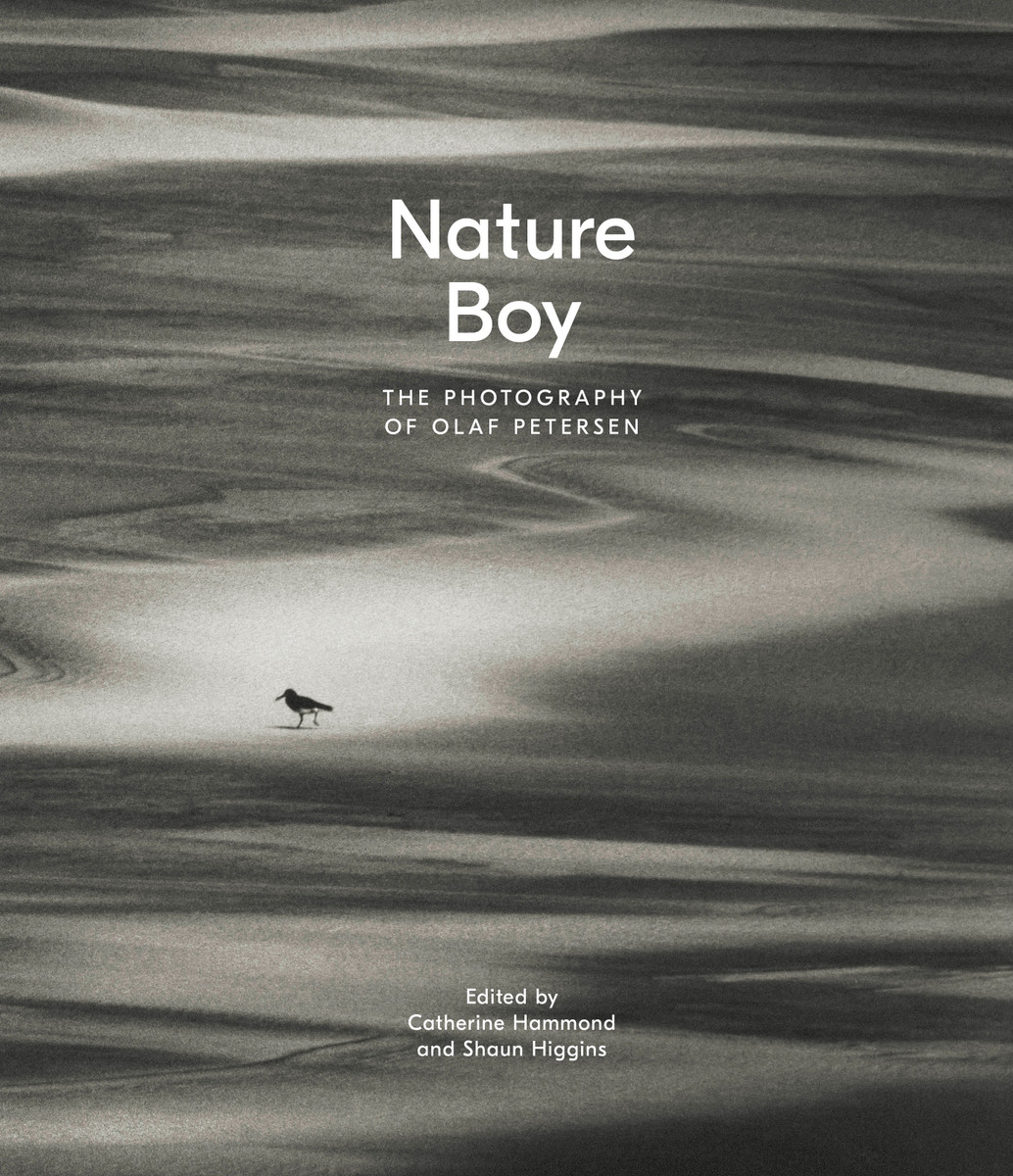 Extraordinary photography of Auckland’s wild west coast from the 1930s to the 1980s.

A gull chick running across Muriwai Beach. Cabbage trees at Lake Wainamu. Tyre tracks, tugs of war and tramping trips. Olaf Petersen produced an unrivalled photographic account of the people and natural world of Auckland’s wild west coast. Nature Boy introduces readers to this remarkable photographer and the landscape he made his own.

Olaf Petersen (1915–1994) grew up in Swanson and acquired his first camera aged eighteen in 1933. For the next fifty years this master of the Rolleiflex TLR and the Hasselblad 500 produced over 50,000 images charting the human impact on New Zealand’s natural environment.

In this book, essays by Shaun Higgins, Andrew Clifford and Kirstie Ross chronicle Petersen’s methods and techniques, his relationship to the ‘camera club’ photographers and the emerging photographic avant-garde, and his links to the trampers and scientists who engaged with the natural world of the Waitākere coast. Those essays are framed by reflections from two life-long daughters of the west, Sarah Hillary and Sandra Coney. Throughout, almost a hundred of Petersen’s evocative photographs provide a compelling visual narrative.

Catherine Hammond is head of documentary heritage at Tāmaki Paenga Hira Auckland War Memorial Museum and was previously research library manager at Auckland Art Gallery Toi o Tāmaki. Recent book projects include Archives of Emotion (Auckland Museum, 2021) and, for Auckland Art Gallery, Frances Hodgkins: European Journeys (co-published with Auckland University Press, 2019), John Nixon: Abstraction (2018), Lisa Reihana’s Emissaries (2018) and In Pursuit of Venus (2015), Frances Hodgkins: Forgotten Still Life (2015) and Modern Paints Aotearoa (2014). She was managing editor of Reading Room: A Journal of Art and Culture (2007–18) and honorary secretary of the Colin McCahon Research & Publication Trust (2014–19). She has an MA in library and information studies from Victoria University of Wellington and a BA in art history from the University of Auckland.

Shaun Higgins is curator pictorial at Tāmaki Paenga Hira Auckland War Memorial Museum. His research interests range from early photographic history in both technology and practice, to its role in documenting social history, conflict and landscape. He engages in the process of photography with cameras old and new, and has applied both historical and technical knowledge to exhibitions for two decades, ranging from Sir Edmund Hillary: Everest and Beyond (2002) to Photographing Early Auckland (2019). Recent research includes a chapter on Clement L. Wragge’s magic lantern lectures in The Magic Lantern at Work: Witnessing, Persuading, Experiencing and Connecting (Routledge, 2020); articles ‘An Early Photographic View of Auckland’ (Back Story: Journal of New Zealand Art, Media & Design History, 2018), ‘Daguerreotypes by Hartley Webster’ (Journal of New Zealand Art, Media & Design History, 2016) and ‘Early New Zealand Daguerreotypes’ (The Daguerreian Annual, 2015); and the book The Anzacs: An Inside View of New Zealanders at Gallipoli (Penguin Random House, 2015). He has an MA, BA and PGDip from the University of Auckland in anthropology, art history and museum studies, and further qualifications in photography and care and identification of photographs.

Andrew Clifford is the inaugural director of Te Uru Waitākere Contemporary Gallery in West Auckland, and was previously curator at the University of Auckland’s Gus Fisher Gallery. His curatorial interests follow the worlds of contemporary art, performance, new media and music, notably with his 2018 touring exhibition, From Scratch: 546 Moons. He has written essays for books about Gavin Hipkins, John Parker, Yuki Kihara, Bepen Bhana, Lisa Reihana, Phil Dadson, Billy Apple, Sean Kerr and Reuben Paterson. He has contributed articles to many publications, including ArtAsiaPacific, Art + Australia, Eyeline, Art New Zealand, Art News New Zealand, New Zealand Listener, New Zealand Herald, Pavement, Rip It Up and Vogue. From 2002 to 2007 he produced music programmes for Radio New Zealand, preceded by ten years at 95bFM. He is a trustee for the Len Lye Foundation and CIRCUIT, and holds an MFA from the University of Auckland.

Sandra Coney is a researcher and writer with a particular focus on the heritage and environment of the west coast of Auckland. She has published over 20 books, most recently On the Radar: The Story of Piha’s World War 2 Radar Station (Keyhole Press/Protect Piha Heritage, 2013) and Gone West: Great War Memorials of Waitakere and Their Soldiers (Protect Piha Heritage Society, 2017). She is an award-winning journalist who for sixteen years had a column in the Sunday Star-Times. She was an editor for fourteen years of the feminist magazine Broadsheet, and co-wrote the Metro article that led to the cervical cancer inquiry and widespread reforms in health consumers’ rights. As a local government politician, she served as a councillor on the Auckland Regional Council and Auckland Council, chairing the parks and heritage committee, is currently a member of the Waitākere Ranges Local Board and chairs the Waitematā DHB Hospital Advisory Committee. She is an associate emerita of the Tāmaki Paenga Hira Auckland War Memorial Museum and has a QSO for services to women’s health.

Sarah Hillary is the principal conservator at the Auckland Art Gallery Toi o Tāmaki. She graduated with a master’s in applied science in the conservation of paintings from the University of Canberra, and her first degree was a BA in art history from the University of Auckland. Sarah has specialised in the technical examination of paintings and published work on the techniques of New Zealand artists such as Colin McCahon, Rita Angus and Frances Hodgkins. She has also been involved in curating exhibitions about artist technique, including Modern Paints Aotearoa (2014–15) and Identifying Lindauer: His Materials and Techniques (2016). She is a practising artist and is represented by Anna Miles Gallery.

Kirstie Ross is senior curator cultural heritage at the Tasmanian Museum and Art Gallery in Hobart. In her previous role as curator history at the Museum of New Zealand Te Papa Tongarewa (2004–18) she curated numerous temporary and permanent exhibitions, leading the curatorial teams on Slice of Heaven: 20th Century Aotearoa and Gallipoli: The Scale of Our War. Her publications include Holding On to Home: New Zealand Stories and Objects of the First World War (Te Papa Press, 2014) and Going Bush: New Zealanders and Nature in the Twentieth Century (Auckland University Press, 2008). Holding an MA in history from the University of Auckland, she researches New Zealand and Tasmanian twentieth-century social history, environmental history, material culture studies and the history of museums and their collections.