On 18 December, the distinguished author, editor and curator Dr Peter Simpson, who has written and edited over 20 books celebrating this country’s art, literature and cultural history, received an honorary Doctor of Letters (honoris causa) from the University of Canterbury to recognise his lifetime contribution to literature and the arts. Auckland University Press congratulates Peter on this outstanding achievement and post his thoughtful speech at the graduation below: 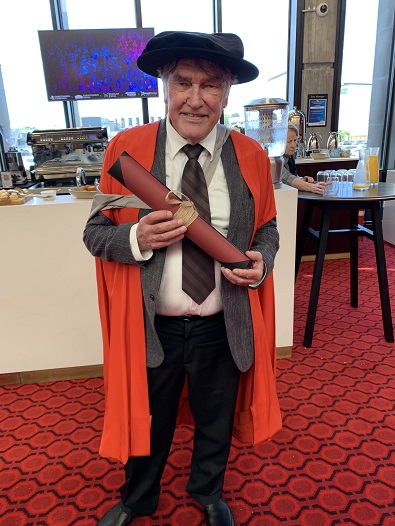 It is greatly pleasing to discover at the age of 78 that life still has the capacity to take you by surprise, as I was surprised and gratified to be awarded this honorary Doctor of Letters degree. To be standing here garbed in this resplendent gown is the last thing I expected. It reminds me what the old woman in the nursery rhyme said when she got her skirts cut about: ‘O, Lord, I be not I.’

Before I go further, let me add my congratulations to all those graduating today. The pride your friends and family feel in your achievements is well deserved. It’s never easy to complete a degree, as I well remember; especially under the exceptional conditions of recent times. It takes dedication and hard work; but the effort is worthwhile. In reaching this goal you will have acquired skills – of focus, organisation, prioritising, clear expression, stickability, delayed gratification, to mention just a few – that will last forever, and enrich your future lives. Most of you will have discovered what you’re good at, and possibly what you’re not so good at. If you’re very lucky you may also have hit upon a direction which will define the future you construct. That was certainly true in my own case; I owe the University of Canterbury a lot.

I hope you will indulge me if I talk about myself for a bit. Having spent over 40 years lecturing at universities, both this one and several others, it comes most naturally to me to talk in 50 minute stretches. But don’t worry; I’m not going to deliver a lecture; five or six minutes is all I will take. I started at the University of Canterbury exactly 60 years ago, aged 17. I was the first person in my family ever to attend university, so it was like entering an exciting and unknown world. I had a government studentship which meant that I was even paid a modest income and my tuition was free, an unimaginable privilege compared to students of today. Born during World War II – I’m even too old to be a boomer – I was lucky to belong to a generation which the country could afford to educate to a higher degree than before. Even so, the university was tiny in those days. I believe the student population was not much over 1000. And of course we were all crowded together on the old site that is now the Arts Centre, except for the Fine Arts students who had already migrated to Ilam to be followed eventually by the rest of the university.

I came to know the fine Ilam campus later when I returned from overseas to teach in the English Department in the 1970s and 80s. In my student days, of course, the curriculum was much narrower. Take my own case. I imagine that I’ve been granted this degree largely because of the books I have published on New Zealand art, literature and cultural history. But I never studied these subjects at university. You couldn’t; they didn’t exist. I studied literature, but it was all the literature of England, ‘from Beowulf to Virginia Woolf’ as the phrase went. Maori Studies was unheard of in those days. And as for Art History, the subject wasn’t offered at Canterbury then; you couldn’t study Rembrandt or Picasso, let alone Rita Angus or Ralph Hotere or Colin McCahon. Such art history as I acquired I taught myself, a process that’s still ongoing as it happens. Another way of putting this is that in the 1960s the university was very much still a colonial institution and profoundly Anglo-centric or more broadly Eurocentric in its curriculum and outlook. During the sixties that rapidly began to change and I became part of that process of decolonisation. When Professor H. Winston Rhodes first introduced a course in New Zealand literature in 1966 (I think it was), I was a young lecturer in English and took tutorials for him. It was the first such course offered anywhere. Over time such courses greatly expanded, and when I returned to Canterbury in the late-1970s I was much involved with my colleague Professor Patrick Evans in developing a full programme in New Zealand literature.

This leads me to another point. Eventually, I specialised in a subject I had not studied myself; but that doesn’t mean that I despise and regret the education I received. On the contrary, I value it highly and remember my teachers with affection and admiration – Professor Rhodes, Dr Ray Copland, Lawrence Baigent, Professor Neville Phillips in History and others – all wonderful and inspiring lecturers. Times change; countries evolve; so does education. This is the way of the world.

Up to a point, at least in the arts and humanities, I don’t think it matters so much what you study precisely; the more important part of study is the how – learning to manage large amounts of information; to read widely and imaginatively; to construct and defend an argument; to write fluently and cogently; above all how to think creatively and critically. These skills are more than ever important in an age when misinformation multiples like a virus; when lies are called truth and truth is called fake news. We are blasted daily with a firehose of falsehood. A solid education such as you have received is the best defence against the militant and anti-democratic forces of darkness and ignorance.

As graduates in arts, maybe you’ll find a vocation where your studies are immediately relevant and maybe not. Maybe you’ll find yourselves working in a field related to your degree but only indirectly; like me. Maybe your future will be in some completely different sphere. But that will in no way render your degree irrelevant. Not at all. I’m old-fashioned enough to dislike the narrow idea of education as training for a specific job. If special training is needed it can come later. To my mind education is all about informing yourself about the world and training the mind in the broadest possible way.

But I also wish to emphasise the value of deep and specialist knowledge. Many will go on to further and more specialised study or have already done so. In conclusion, I will share with you some words that have been a kind of mantra for me. They are by the American poet Charles Olson, author of a famous book Call Me Ishmael about the writer Herman Melville. You’ll have to excuse his rather old fashioned beatnik and sexist rhetoric of the mid-1950s:

‘Dig one thing or place or man until you yourself know more abt that than is possible to any other man. It doesn’t matter whether it’s Barbed Wire or Pemmican or Paterson or Iowa. But exhaust it. Saturate it. Beat it./And then U KNOW everything else very fast: one saturation job (it might take 14 years). And you’re in, forever.’ (A Bibliography on America for Ed Dorn.)

My own biggest saturation job (a lot more than 14 years!) was into the life and work of the great New Zealand painter Colin McCahon, a man of true intelligence and wisdom. When asked how he would advise students, he said to them to immerse themselves in the history and traditions of their subject (‘the whole symphony of what has been’, as he put it), and then to seek out and pursue as ardently as possible their own unique sense of direction. That is what I have tried to do. I hope you will too.