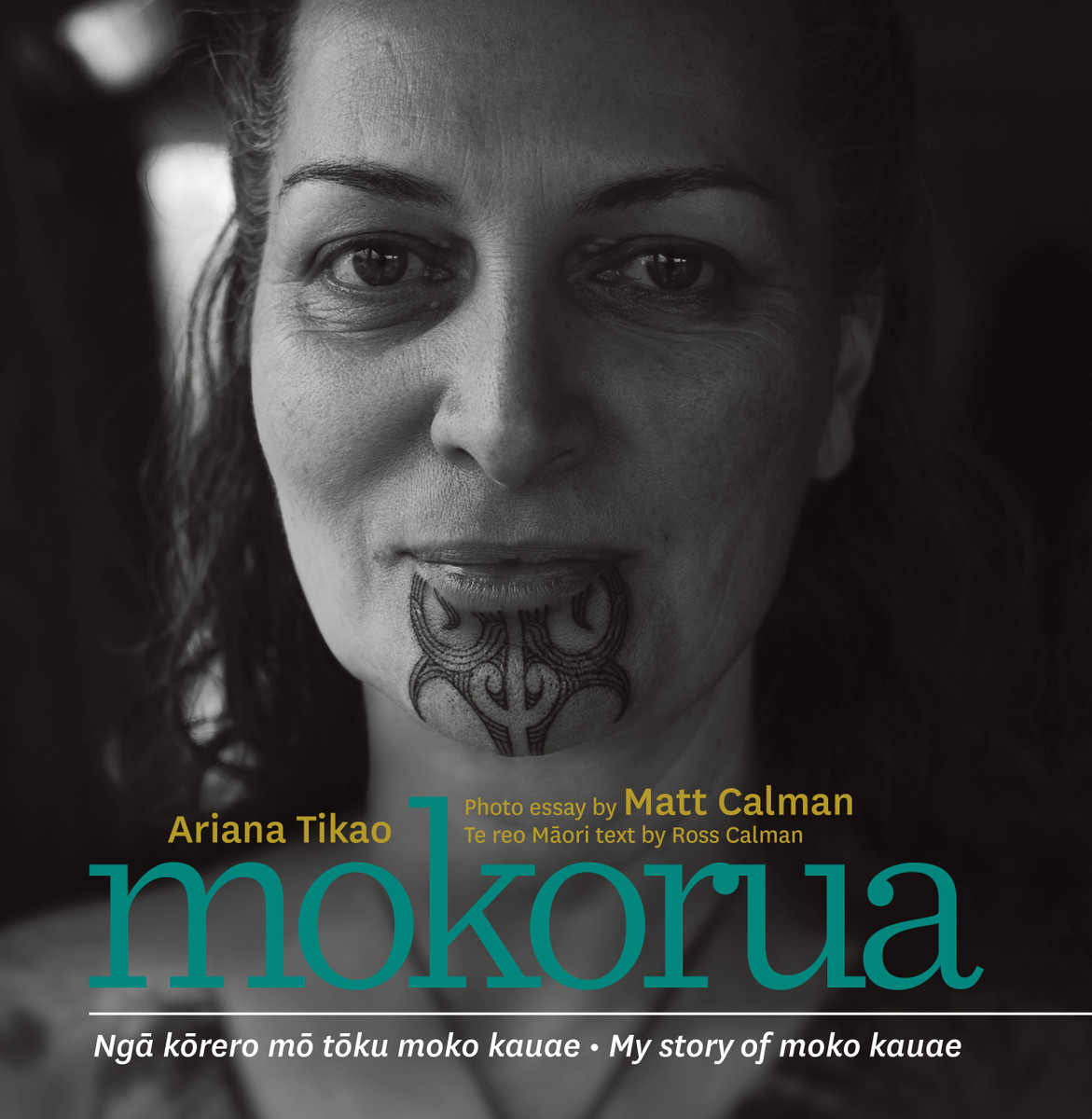 One woman’s journey to her moko kauae as an expression of her Kāi Tahu identity.

Mokorua is a revealing and emotional account of one woman receiving her moko kauae.

Ariana Tikao grew up in suburban Christchurch in the 1970s and ’80s surrounded by te ao Pākehā. This book tells the story of Ariana exploring her whakapapa, her whānau history and her language. This is one woman’s story, but it is interwoven with the revival of language, tikanga and identity among Kāi Tahu whānau over the last thirty years.

Ariana’s journey culminates in her decision to take on Mokorua – her moko kauae – from tā moko artist Christine Harvey. After an emotionally charged ceremony that brought together whānau, young and old, for songs and tautoko, hugs and tears, Ariana writes: ‘Our whānau had reached another milestone in the decolonisation process – or, rather, in our journey of reindigenising ourselves, becoming who we always were.’

Through Ariana’s words, te reo Māori text by her hoa tāne Ross Calman, and an intimate, moving photo essay by Matt Calman, Mokorua reveals the journey of one woman reclaiming her Māori identity.

My moko has now surfaced from beneath my skin, and she, Mokorua, has revealed
herself in her green-lined goodness.

Ariana Tikao is a singer, taonga puoro musician and writer of Kāi Tahu descent, and recipient of a 2020 Arts Foundation Laureate award. She writes waiata, poetry and creative non-fiction exploring themes relating to her Kāi Tahu identity and mana wahine, often drawing on historical kōrero from her ancestors. She is among the current generation of artists and leaders rejuvenating taonga puoro, following in the footsteps of Hirini Melbourne and of her mentors Richard Nunns and Brian Flintoff.

Matt Calman is of Ngāti Toa, Raukawa-ki-te-tonga, and Kāi Tahu descent. He is a trained artist, with a Diploma of Arts (with Hons) from the Design and Arts College of New Zealand, majoring in photography, and went on to study journalism, graduating with a Diploma in Journalism from Massey University. Matt worked at the Dominion Post from 2007 to 2010, and is the author of The Longest Day (Allen and Unwin, 2020). Matt received his own tā moko from Porirua artist Wiremu Barriball in 2016. He lives in Ōtautahi with his wife, Ranui Calman, and their daughters.

Ross Calman (Ngāti Toa, Ngāti Raukawa-ki-te-tonga, Kāi Tahu) is a freelance writer, editor and licensed translator. He is the author of a number of works on aspects of Māori history and culture, including most recently He Atua, He Tangata: The World of Māori Mythology (with A.W. Reed; Oratia, 2022), He Pukapuka Tātaku i Ngā Mahi a Te Rauparaha Nui/A Record of the Life of the Great Te Rauparaha (AUP, 2020), and Te Tiriti o Waitangi (with Toby Morris, Mark Derby and Piripi Walker; Lift, 2019). He is Ariana’s husband and Matt’s cousin.

Christine Harvey (Ngāti Mutunga o Wharekauri, Moriori, Te Ātiawa ki Te Tauihu, Ngāti Toa Rangatira, Kāti Māmoe) was the first wahine to commit to the revival of tāmoko in the mid-1990s. After training as a painter initially, she was drawn into toi Māori and was mentored by artists and tohunga tā moko such as Riki Manuel. Christine also works with other media, including stone, metal, bone, wood and resins. Recently she has been experimenting with muka fibres and 3D design based on Māori and Moriori traditional art forms.

Tāhuhu Kōrero: The Sayings of Taitokerau