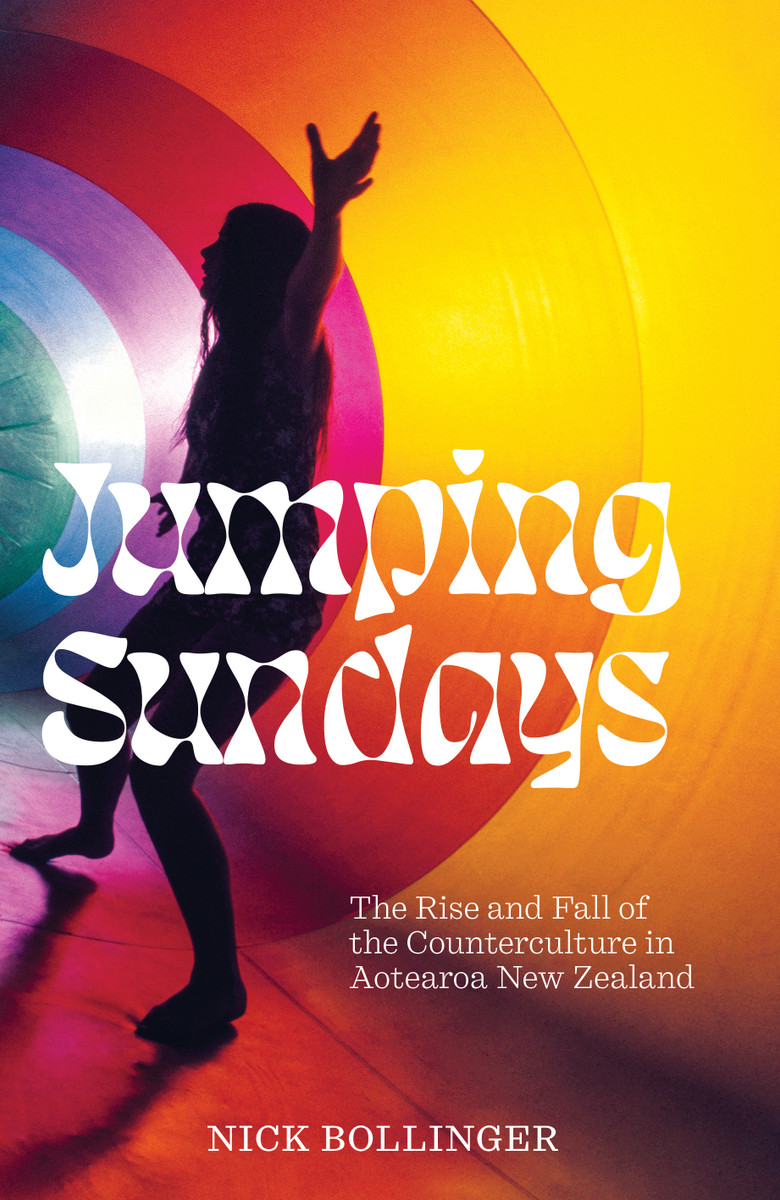 Jumping Sundays: The Rise and Fall of the Counterculture in Aotearoa New Zealand

Award-winning writer Nick Bollinger’s deep history of the transformation of New Zealand life wrought by the counterculture in the 1960s and ’70s.

On a Sunday afternoon in the spring of 1969, thousands of people defied Auckland city bylaws and came to party in Albert Park. A rock band played on the rotunda. Some people held hands, some danced alone, some sat under trees with guitars, flutes and bongos and made music of their own. They wore kaftans, ponchos and leather-fringed jerkins, floppy hats, headbands, beads and flowers. Poetry and political diatribes were delivered from a podium, improvised from an upturned tea chest. There were bikies, balloons, bubbles, sack races and a lolly scramble, lots of dogs and a pet possum. Someone brought a canoe and paddled it around the fountain, until it capsized. As the afternoon wore on there were joss sticks, skyrockets and what some will have recognised as the musky smell of marijuana. . .

In Jumping Sundays, award-winning writer and broadcaster Nick Bollinger tells the story of beards and bombs, freaks and firebrands, self-destruction and self-realisation, during a turbulent period in New Zealand’s history and culture.

Nick Bollinger is a Wellington-based writer, broadcaster and critic. He was a music columnist for the Listener for more than twenty years, has written for Mojo and been the voice of Radio New Zealand’s music review programme The Sampler.He is the author of How to Listen to Pop Music (2004), 100 Essential New Zealand Albums (2009) and Goneville: A Memoir (2016), all published by Awa Press. Originally a thesis written for the creative non-fiction programme at the International Institute of Modern Letters, the manuscript of Goneville won the 2015 Adam Foundation Prize in Creative Writing and was longlisted for the New Zealand Book Awards.

‘I picked up the package at the post office and thought, “what the fuck is this?”, thinking maybe the inheritance had finally come through! It turned out to be Jumping Sundays. Well, that was part of my inheritance, in fact, because I lived through most of it. Not that I was a big maker of it at all. I steered well clear of the Jumping Sundays, and I’ve never been in a protest. I was always just doing what I was doing, making my poems. But the book reminded me of things I’d forgotten, and it made me aware of things I was only vaguely aware of at the time. I loved reading the book and think that Nick Bollinger has done a fine job.’ — Sam Hunt

‘A compelling and important history of the counterculture in Aotearoa New Zealand. Meticulously researched and full of vivid details and memorable photographs, this book is an immensely readable and absorbing account of an important era in our recent history.’ — Sue Kedgley

‘Jumping Sundays is a fluent, vivid, coherent and succinct account of a period of turmoil during which major changes took place in New Zealand society, and of the ways we understood what that society was, what it had been, and what it could yet become.’ — Martin Edmond

‘An absorbing and serious account that is also terrific fun. Deft interviews and personal letters provide rollicking recollections together with many amazing new photographs and images. Bollinger puts a personal and personable stamp on this critical decade with words, sights and sounds that surprise and delight.’ — Bronwyn Labrum