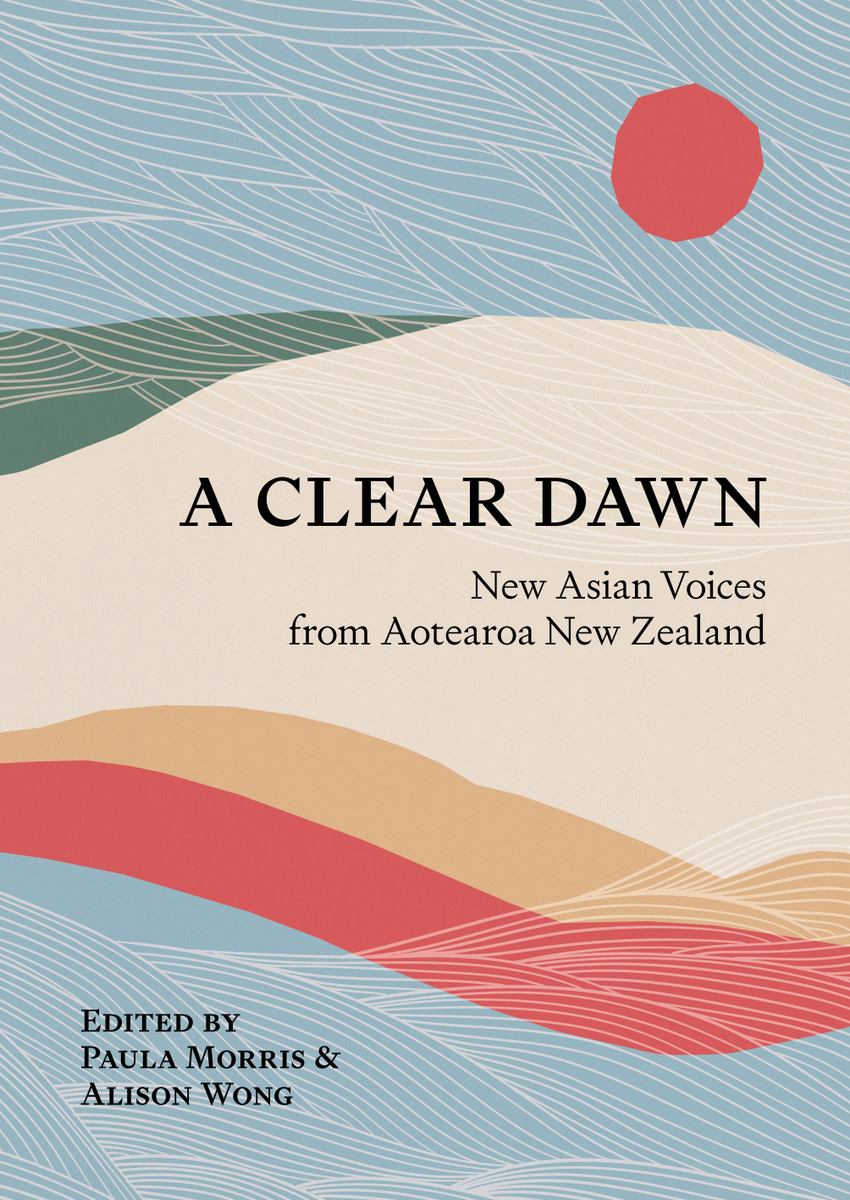 This landmark collection of poetry, fiction and essays by emerging writers is the first-ever anthology of Asian New Zealand creative writing.

A Clear Dawn presents an extraordinary new wave of creative talent. With roots stretching from Indonesia to Japan, from China to the Philippines to the Indian subcontinent, the authors in this anthology range from high school students to retirees, from recent immigrants to writers whose families have lived in New Zealand for generations.

Some of the writers – including Gregory Kan, Sharon Lam, Rose Lu and Chris Tse – have published books; some, like Mustaq Missouri, Aiwa Pooamorn and Gemishka Chetty, are better known for their work in theatre and performance. For many, A Clear Dawn is their first-ever print publication.

The 75 writers explore the full range of human experience: from the rituals of food and family to sexual politics; from issues around displacement and identity to teen suicide and revenge attacks; from political chicanery to social activism to childhood misadventures. Funerals, affairs, accidents, friendships, crimes, jealousy, small victories, devastating losses, transcendent moments: all are here.

With its diverse voices, styles and points of view, A Clear Dawn maps a new literature of Aotearoa New Zealand.

‘For this anthology, we came together as tangata whenua and tauiwi. Our work here is a karanga that opens up a space for other voices so that many different currents can flow into one meeting place.’

Paula Morris MNZM (Ngāti Wai, Ngāti Manuhiri, Ngāti Whatua) is an award-winning novelist, story writer and essayist from Auckland. Her most recent books are False River (Penguin, 2017), a collection of her essays and stories; and Shining Land (Massey University Press, 2020), a collaboration with photographer Haru Sameshima about the writer Robin Hyde. She is the editor of the Penguin Book of Contemporary New Zealand Short Stories (2009) and a co-editor (with Michelle Elvy and James Norcliffe) of Ko Aotearoa Tātou / We Are New Zealand (Otago University Press, 2020).

Paula is an associate professor at the University of Auckland, where she is the director of the Master of Creative Writing. She has mentored writers through the NZSA and the Te Papa Tupu Māori Writers Incubator, and also teaches writing at festivals, schools, universities and community programmes in New Zealand and overseas. Paula has been awarded numerous international residencies, and in 2019 was the Katherine Mansfield Menton Fellow. A former judge for the Commonwealth Story Prize, the Pikihuia Awards and the ARA Historical Novel Prize, she has appeared at festivals in Australia, Canada, China, Europe, India, South Africa, the UK and the US, and at events on indigenous writing and publishing in Banff, London and Taipei.

Alison Wong’s family first arrived in Aotearoa New Zealand in 1879 from Zengcheng/Jung Seng ( 增城 ), Guangdong, China. Her maternal great-grandfather, Huang Guomin (黃國民), raised money in New Zealand for the 1911 Revolution, and was called back to China by Sun Yat Sen to be county magistrate. In 1914, her paternal great-grandfather, Huang Weijin (黃維進), was murdered in Wellington; the case was never solved.

Alison grew up in Hawke’s Bay and has lived most of her life in Wellington. She spent several years in China in the 1980s and ’90s, initially in Xiamen on a New Zealand – China student exchange scholarship, then later in Shanghai. She returned to Hong Kong/China for literary festivals and residencies through the 2010s, and now lives in Geelong, Australia, moving back and forth across the Tasman.

Alison’s novel, As the Earth Turns Silver (Penguin/Picador, 2009), won the 2010 NZ Post Book Award for Fiction and was shortlisted for the Australian Prime Minister’s Literary Awards. It was nominated for the 2011 International IMPAC Dublin Literary Award and in 2018 was selected by Booksellers NZ as one of the top 20 bestsellers of the decade. Alison’s poetry collection, Cup (Steele Roberts, 2006) was shortlisted for the Jessie Mackay Award for first book of poetry at the 2007 Montana NZ Book Awards. Her work was selected for Best New Zealand Poems 2015, 2007 and 2006. An NZSA mentor, she was also a poetry judge for the 2018 Ockham NZ Book Awards and in 2020 a consulting editor for the Asian culture site Hainamana.

‘A Clear Dawn registers a demographic shift that has already happened in Aotearoa New Zealand. But more significantly it enlarges the dimensions of our imagination, revealing a more various and cosmopolitan literature than the publishing mainstream has hitherto accounted for. To call this a landmark anthology, then, is not to overpraise the writing it contains – it’s a plain statement of fact.’ — Chris Price

‘With a wide-reaching scope and a dazzling line-up of 75 diverse contributors, the writing in A Clear Dawn brings with it humour and irreverence, insight, wisdom, sharpness, joy and pain as a new generation of Asian New Zealand writers explore themes such as family, identity and the complexities of straddling two or more different cultures in mixed race families.’ — Kiran Dass

‘Breathtaking in its parts and as a whole! Even if you know a part of Asia well, even if you feel in touch with present-day Aotearoa, this anthology will surprise you again and again, as, voice by unique voice, truth by particular truth, its artists build a mosaic you have never seen before.’ — Rajorshi Chakraborti

'This is an anthology made with love and hope, for us. Our writers speak directly to our community: insider to insider, we get it; we feel and cry and pulse. We are happy and grateful that at last—after 200 years of being present in the NZ landscape—there is a physical manifestation of our voices and we can feel the sunlight on our faces.' — Renee Liang for Landfall

'A Clear Dawn marks a renewed refusal to remain silent. Although diverse, we unite to give voice to injustice and see our experiences represented on the page.' — Naomii Seah for The Pantograph Punch

'This fabulous anthology of poetry and fiction, so astutely and loving assembled by Paula Morris and Alison Wong, is sheer reading joy.' — Paula Green for Poetry Shelf

No Other Place to Stand: An Anthology of Climate Change Poetry from Aotearoa New Zealand