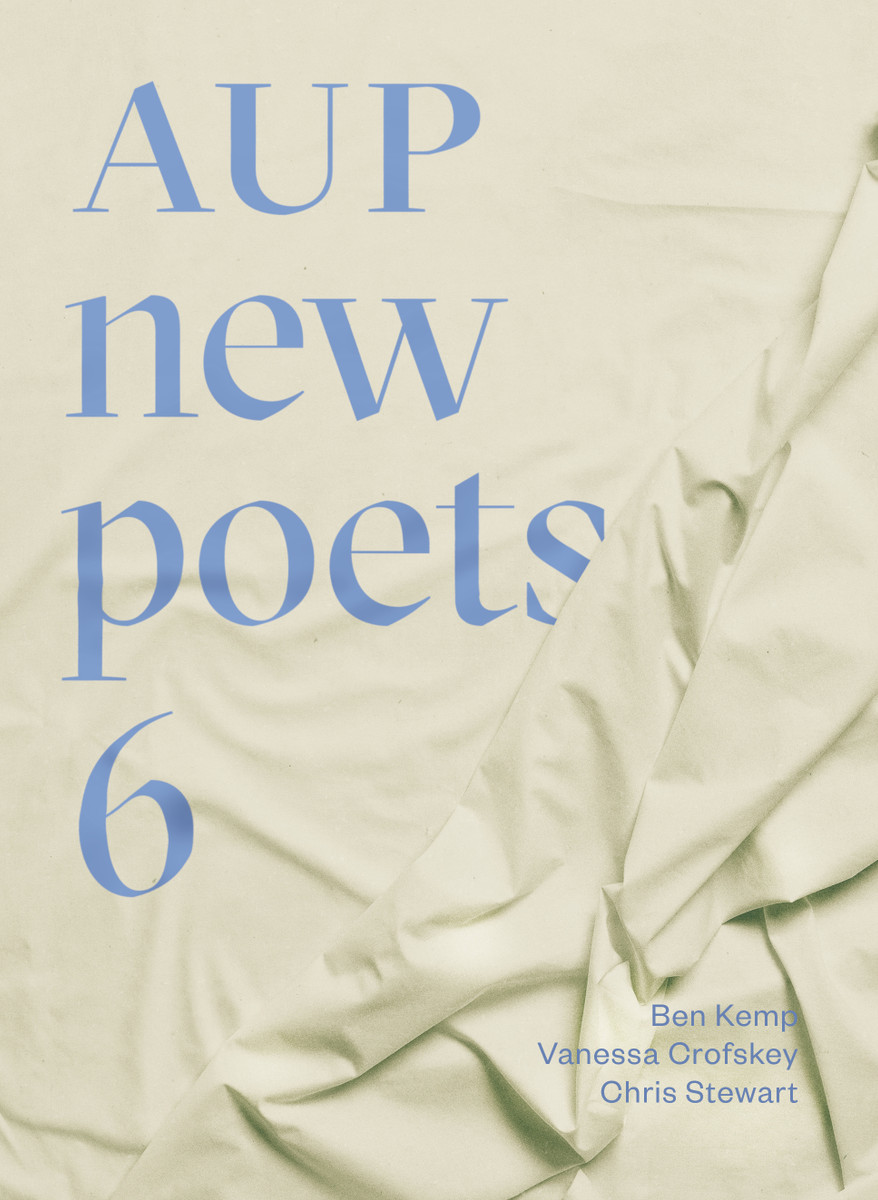 Relaunched under the editorship of Anna Jackson in 2019, AUP New Poets 6 includes substantial selections from the poetry of Ben Kemp, Vanessa Crofskey and Chris Stewart.

We move from Kemp’s slow-paced attentive readings of place and people, in a selection moving between Japan and New Zealand, to the velocity of Vanessa Crofskey’s fierce, funny, intimate and political poetry, which takes the form of shopping lists, Post-it Notes, graphs, erasures, a passenger arrival card and even *poetry*, and finally to Chris Stewart’s visceral take on the domestic, the nights cut to pieces by teething, the gravity of love and the churn of time.

AUP New Poets 6 is an arresting introduction to the rich diversity of contemporary New Zealand poetry.

Ben Kemp works as a primary school teacher in Papua New Guinea where he has lived for the past three years with his diplomat wife and three children. Gisborne-born Kemp arrived in the Pacific following six years in Australia and ten years in Japan. Tokyo was where he discovered his passion for Kabuki theatre and Japanese film and literature. Between 2003 and 2010 he recorded three studio albums with his band Uminari and toured in Japan, Australia and New Zealand. His artistic work has often explored the nexus between Japanese and Māori/Polynesian culture. He credits the late Taupo-based Māori writer and mentor Rowley Habib with helping him tap into poetry and original writing in his twenties.

Vanessa Crofskey (born in 1996) is a writer and artist of Hokkien Chinese and Pākehā descent. She graduated from Auckland University of Technology with a degree in Sculpture in 2017. Through her practice she investigates social connection: how we form identities through intimacy, inheritance, location and violence. Vanessa has published and presented widely as an interdisciplinary artist – in performance spaces, galleries, festivals plus digital and print publications. She has written for The Spinoff, Gloria Books, New Zealand Herald, Dear Journal, Hainamana and other serious publishing places. She is also a two-time poetry slam champion and award-winning theatre maker but we promise that doesn’t detract from the rest of her career and personality. Vanessa currently works for The Pantograph Punch as a staff writer, and as a curator at Window Gallery (University of Auckland). She advocates for complex trauma survivors and those with attention deficit disorder, plus is very funny and knows a lot about what snacks to eat.

Chris Stewart was born in Wellington but grew up in Christchurch. He has a BA in History and Art History with minors in English and Education from the University of Otago and two graduate diplomas in teaching. After completing the course at the Hagley Writers’ Institute in 2015, winning The Margaret Mahy Prize, his poems have been published in New Zealand journals such as Snorkel, Takahē, Sweet Mammalian, Brief, Catalyst, Mimicry, Blackmail Press, and Aotearotica. He regularly attends the monthly open mic event ‘Catalyst’, a forum for literary and performance poets in Christchurch. Most importantly, he is a son, a brother, a husband, and a father.

‘It is said that we are in the middle of a poetry revolution in New Zealand: there is certainly a lot of production, an eager climate of reception, and a sense that new cultural confidences and anxieties are finding new expression. It is a pleasure, then, to find a carefully chosen selection of new poets and new poems that show the rich diversity of the contemporary scene: from Ben Kemp entering ‘the arteries of Tokyo . . . with ears open’, to Vanessa Crofskey’s barbed attention to the deceptions and oddities of our try-hard but not really multicultural society, to Chris Stewart’s patient observations of family and childbirth.’ – Mark Williams