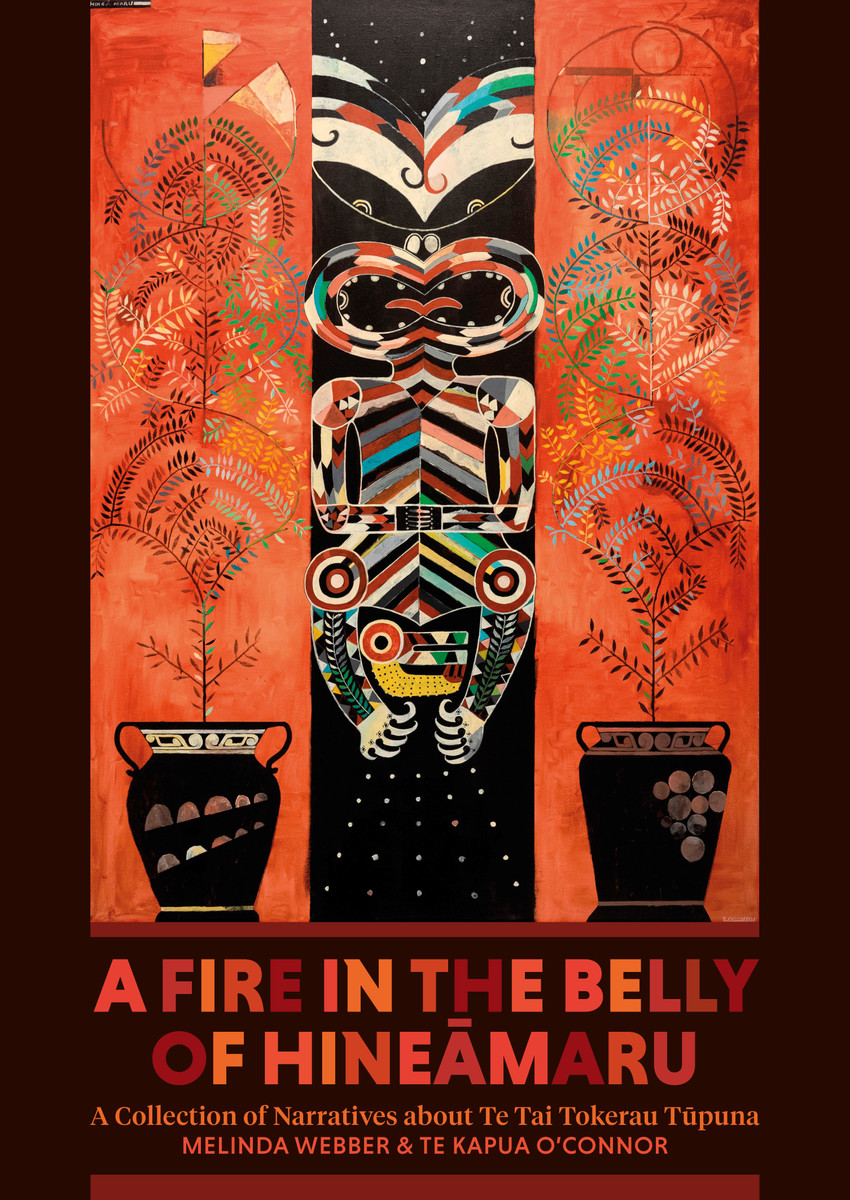 A Fire in the Belly of Hineāmaru: A Collection of Narratives about Te Tai Tokerau Tūpuna

‘E kore e mōnehunehu te pūmahara ki ngā momo rangatira o neherā nā rātou nei i toro te nukuroa o Te Moana Nui a Kiwa me Papa Tū a Nuku. Ko ngā tohu o ō rātou tapuwae i kākahutia ki runga i te mata o te whenua – he taonga, he tapu.
Time will not dim the memory of the special class of rangatira of the past who braved the wide expanse of ocean and land. Their sacred footprints are scattered over the surface of the land, treasured and sacred.’
— Sir James Hēnare

From peacemakers and strategists to explorers and entrepreneurs, the tūpuna of the North are an inspiration to the people of Te Tai Tokerau. This remarkable book by Melinda Webber and Te Kapua O’Connor introduces a new generation to twenty-four of those tūpuna – Nukutawhiti and Hineāmaru, Hongi Hika and Te Ruki Kawiti, and many more. Through whakapapa and kōrero, waiata and pepeha, we learn about their actions, their places, their values, and their aspirations.

Published in both a te reo Māori edition translated by Quinton Hita and an English-language edition, and featuring original cover art by Shane Cotton, A Fire in the Belly of Hineāmaru is a call to action for Te Tai Tokerau today – a reminder to celebrate the unbroken connection to histories, lands, and esteemed ancestors.

Melinda Webber (Ngāti Kahu, Ngāti Hau, Ngāti Hine, Ngāpuhi, Ngāti Whakaue) is a professor and Te Tumu/Deputy Dean in the Faculty of Education and Social Work at Waipapa Taumata Rau/the University of Auckland. She is a former Fulbright/Ngā Pae o te Māramatanga scholar. In 2016, she was awarded a Marsden Fast-Start grant to undertake a research project examining the distinctive identity traits of Te Tai Tokerau tūpuna (leading to this book), and in 2017 she was awarded a prestigious Rutherford Discovery Fellowship to tackle an important question facing educators – ‘How can we foster cultural pride and academic aspiration among Māori students?’. Melinda Webber was the 2017 Director for Phase Three of The Starpath Project and is currently the University of Auckland co-director for the Atlantic Fellows for Social Equity programme. She also spent six years as a co-principal investigator on the Ngā Pae o te Māramatanga-funded project ‘Ka Awatea’ which examined the nature of teaching, learning, and home socialisation patterns that support Māori student success in education. Melinda’s research focuses on better understanding the effects of Māori student motivation and academic engagement, culturally sustaining teaching, localised curricula, and enduring school–family–community partnerships for learning.

Te Kapua O’Connor (Ngāti Kurī, Pohūtiare) is a doctoral student at Te Wānanga o Waipapa: School of Māori Studies and Pacific Studies at Waipapa Taumata Rau/the University of Auckland. Between 2017 and 2020 Te Kapua worked as a researcher on the Marsden Fast-Start-funded project led by Professor Melinda Webber. The project examined the distinctive identity traits of Te Tai Tokerau tūpuna and led to this book. In 2020, Te Kapua secured a University of Auckland Doctoral Scholarship to commence his PhD. He was also awarded the 2021 Tā Hemi Henare Scholarship from the Kōhanga Reo National Trust Board to further support him in his doctoral studies. Te Kapua is studying the tikanga of ahikā, striving to broaden, add nuance, and challenge some of what we know about the celebrated tikanga.

Tāhuhu Kōrero: The Sayings of Taitokerau